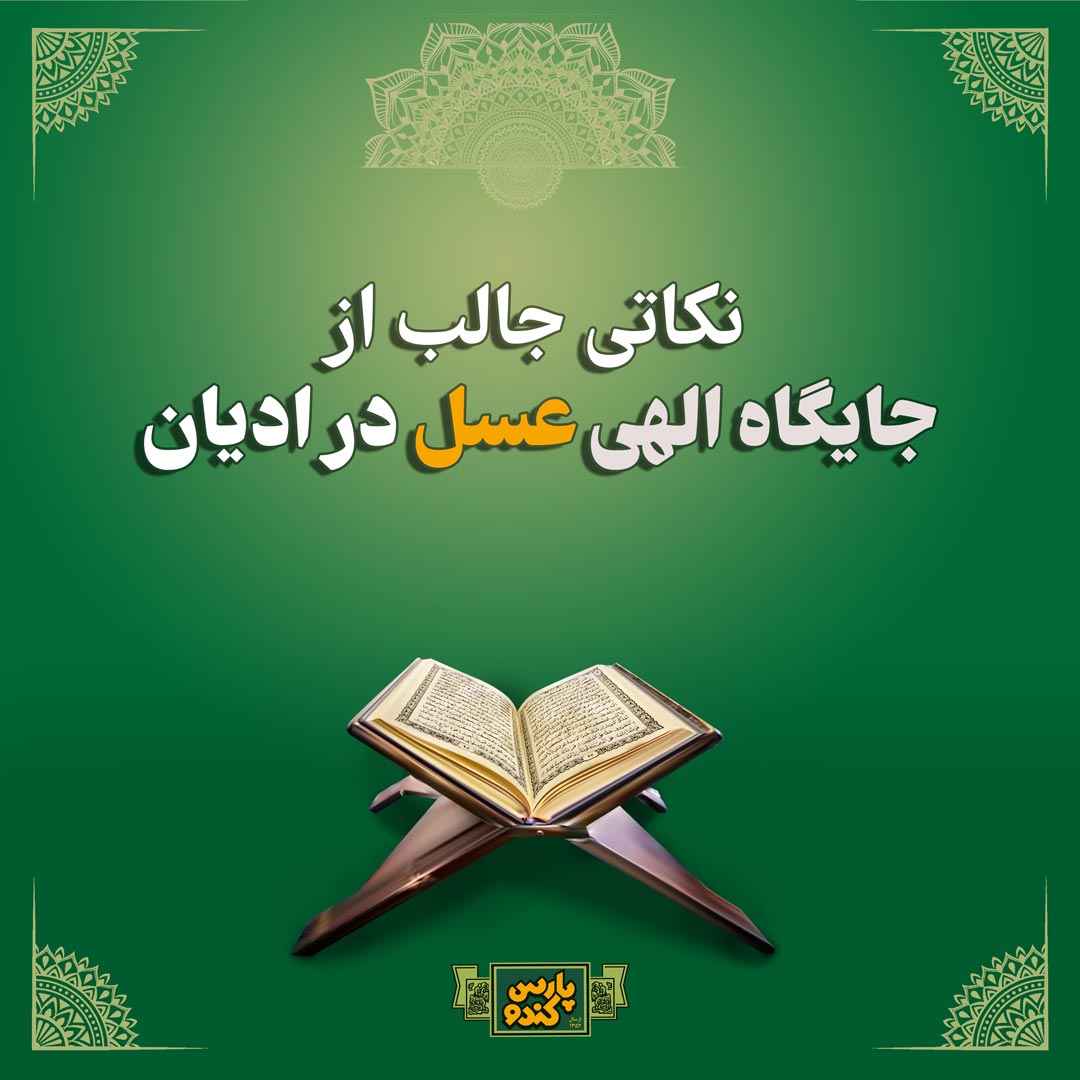 The religion of Islam

In the Quran, honey is mentioned in two chapters. In the Qur'an, there is a whole chapter named Nahl, which means honey bee. The word Nahl is mentioned twice in verses 68 and 69 of this surah, and in these verses, the creation of the bee and the healing properties of honey are mentioned, and at the end, the importance of thinking in the life of honey bees and receiving divine signs is mentioned.
It is stated in this surah:
And your Lord revealed to the bee that you should make houses for yourself from parts of the mountains, from some trees, and from what they make scaffolding, then eat from all fruits, and follow the ways of your Lord obediently. (Then) from its (belly), nectar of various colors comes out. In it, it is therapeutic for people. Indeed, in this (the life of bees) is a sign (of divine power) for people who think.

In various narrations, Imam Masoum (a.s.) has also stated the nutritional value and medicinal properties of honey. It has been narrated from Imam Sadiq (a.s.) that the Prophet of Islam (p.a.) was very fond of honey and said about it: "Alaikum bi-shifafa from honey and the Qur'an." It is up to you to get healing from honey and Quran.
Imam Reza (pbuh) has narrated from his dear ancestors that the Messenger of God (pbuh) said: "If there is healing in something, it is in the condition of al-Hajjam or in the syrup of al-Asal." If there is a cure in anything, it is in Nishtar cupping or honey syrup.

And again, Imam Reza (a.s.) has been quoted as follows: "Honey is a cure for any kind of disease." "Drinking honey while fasting cuts phlegm, reduces bile and strengthens the mind."

The Prophet, peace and blessings be upon him, says:
"Al-Taib is easy, and al-Asal is easy, and looking at the green is easy, and standing is easy"] Mustardak al-Usayl, vol. 16, p. 367]
"A pleasant smell, honey, looking at greenery and horse-riding bring vitality and freshness."

Honey is also mentioned in other religions. John the Baptist was saved by honey. Yahya's clothes were made of camel hair and he had a leather belt around his waist. His food was locusts and wild honey. (Mark 1:6, Matthew 3:4)
On the day when Christ returned from the dead and appeared in front of his disciples, he asked them for food. They gave him fried fish and a comb of honey (Luke 42:42). Christ ate those foods to prove to his disciples that he was truly resurrected and not just a ghost or a ghost

Honey is also mentioned in other religions. We have all heard of a land flowing with rivers of milk and honey. This term is a famous metaphor that Jews used when talking about Palestine to describe the abundance of blessings in that region. This description is repeated 21 times in the Bible.
Philo of Alexandria in his book "Life of Revelation" introduces a tribe of Hebrews called Essenes. They lived in the Bahr al-Mit (Dead Sea) area and it was believed that they were engaged in bee breeding and honey production.
Josephus also mentions the Essenes of Judea in the collection of books "Jewish Antiquities". The Greek term Esnos (king bee) was one of the titles of Zeus (the god of the ancient Greek gods). The priestesses of the Temple of Artemis were called Melissai (bees) and their high priests were called Essenes.
Prophet Isaiah (eighth century BC) also mentions honey and butter: "...everyone should feed on the honey and butter that is left in the heart of this land" (Isaiah 21:7).
The abandonment of honey by the Jews at the people's request to Ishmael is also proven for future use: "Do not treat us violently for storing wheat, barley, oil, and honey in our lands." (Jeremiah 8:41)
300 years ago, David's troops were given honey, "They brought beds and pans and earthen vessels and wheat and barley... and also beans and lentils... and honey and butter for David and his people to eat; Because they said that people are hungry, thirsty and tired in the desert" (Book of Samuel, chapter 17, verses 28 and 29).
It seems that honey has never been removed from their food basket. Ibn Sirak recognized honey as "one of the most important foods in human life" (Book of Advice and Example, 26:39).
A person may be completely averse to honey, but to one who is hungry, everything bitter will be sweet (Proverbs 7:7).

The Torah introduces Rosh Hashanah with this name and considers it the first day of the seventh month of the Torah calendar. Remembering the blowing of the shofar and those who have passed away, as well as the day of creation of the world and Adam
New Year's Eid is the beginning of ten days of repentance. According to Jewish traditions, this Eid commemorates the day of Adam's creation, in which the destiny of every creature in the new year is determined. As if, according to the poet's visual representation, on this day his fate is written and sealed in the book that is placed in the presence of the almighty arbiter of the whole earth. On this day, God determines the life of society and individuals in the new year based on their actions of the past year. Therefore, two days of Rosh Hashanah have been set as a complete holiday for Kilimians, and by attending synagogues and performing special ceremonies, they ask God for a good and prosperous destiny.

In the night of this Eid, it is customary to eat special foods that have a symbolic aspect (in terms of the Hebrew meaning). According to customs, they put an apple in honey and recite this prayer:
יהי רצון שתתחדש עלינו שנה טובה ומתוקה
May we be satisfied with your presence, our creator God, who will bring back a good and sweet year for us.